Life of a Craphead Artist Presentation 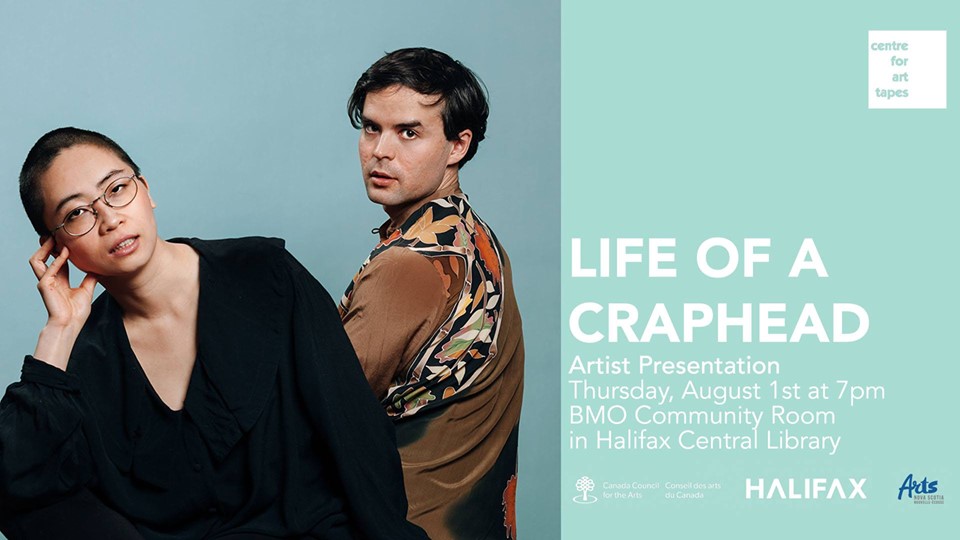 Location: BMO Community Room in the Halifax Central Library
Time: 7pm – 8:30pm
Event is welcome to all, free of charge and accessible.

About Life of a Craphead:
Life of a Craphead is the collaboration of Amy Lam and Jon McCurley. Their work spans performance art, film, and curation. The name “Life of a Craphead” comes from the opening joke of the very first live comedy routine they performed together in 2006. Amy is Chinese and Jon is Vietnamese-Irish and they live and work in Toronto, Canada.

Performance projects include The Life of a Craphead Fifty Year Retrospective, 2006-2056 (Art Gallery of Ontario, Toronto, 2013), a fake career retrospective of all the work they will ever make; Double Double Land Land (Gallery TPW, Toronto, 2009), a play interrupted by a staged wedding; and Free Lunch (2007), a public, anonymously-advertised free lunch serving everything on the menu of a restaurant.

Their first feature film Bugs (72 min., 2016) has screened in Canada and the U.S., including at Night Gallery, Los Angeles; The Western Front, Vancouver; Parsons School for Design, NYC; The Khyber Centre for the Arts, Halifax; and S1, Portland, among others. Life of a Craphead also organized and hosted the popular performance art show and online broadcast Doored from 2012-2017, which featured work by over 120 artists.

Life of a Craphead have been artists-in-residence at the Macdowell Colony, U.S.; the Banff Centre, Canada; Department of Safety, Anacortes, U.S.; Wunderbar, U.K.; Struts/Faucet, Canada. They were longlisted for the 2018 Sobey Art Award.

the UNSEEN on the LARGE app

Say hello to our new Artist in Residence, Israel Ekanem!

We are so excited to introduce you all to our 2018/19 Cyber Social Artist in Residence, Israel Ekanem!