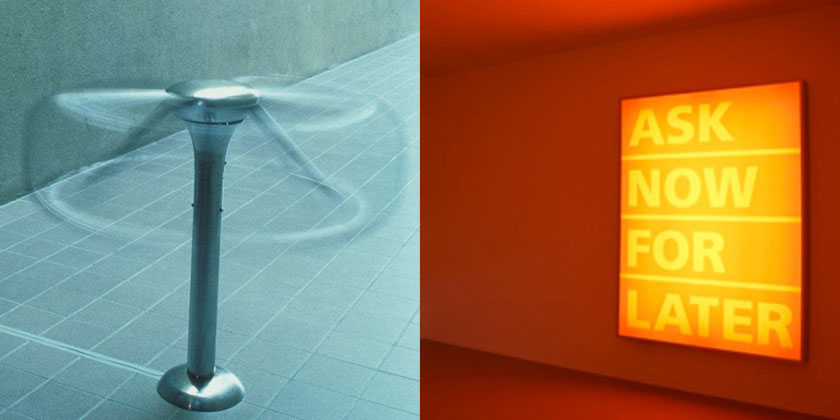 The artists and curators will travel to Halifax for a group residency from 11–17 November 2013 to produce a collaborative work which will premiere at the exhibition in October 2014.

Germaine Koh’s art practice focuses on the site-specific socio-geographic implications of common spaces and the use of everyday objects, while Edith Flückiger works with ideas of memory, cartography, text and digital media, and plays with our perception of human figures.

A public artist talk will be held on 14 November 2013 at 7 p.m. that will explore Koh and Flückiger’s media arts practices and research, and open a discussion about the collaborative project (im)mobile.

The Centre for Art Tapes is pleased to present this event in the new Project Room—a multi-purpose media arts production and presentation space. The Project Room was custom-built for the Centre and is designed to facilitate collaborative cross-disciplinary art practices, and is available to media artists and non-profit organisations. The Centre for Art Tapes is located at 2238 Maitland Street in Halifax.

This residency is made possible through the generous support of Arts Nova Scotia, the Canada Council for the Arts, Kanton Luzern, and Kulturförderung Swisslos.

Edith Flückiger, born in Vienna, Austria in 1960, lives and works in Lucerne, Switzerland. Edith Flückiger works with video and text. Her art focuses on man’s fate. She explores the fragility of our existence and tangible moments in life. Her installation works both anagrams and video installations were curated in group and solo exhibitions in Europe and South America. Her single channel works have been shown in the last years in the festival circuit of Germany, France, England, and Canada. She has been included in private and public Swiss collections, has won prizes and European residencies in Paris and Berlin. She has served on numerous festivals and art competition juries in Switzerland and abroad. She is working on an upcoming solo exhibition in Switzerland for 2014–15 and her single channel works are to be showcased in two special Swiss focus on video in France and Greece for 2014. Since 2007, she is also head of the video department of the Lucerne University of Applied Sciences and Arts. Her single channel works are promoted through videoart.ch. She is also represented by the Swiss gallery Hilfiker Kunstprojekte.
www.edithflueckiger.ch

Germaine Koh is a Canadian visual artist based in Vancouver. Her conceptually-generated work is concerned with the significance of everyday actions, familiar objects, and common places. Her exhibition history includes the BALTIC Centre (Newcastle), De Appel (Amsterdam), Musée d'art contemporain de Montréal, Para/Site Art Space (Hong Kong), Frankfurter Kunstverein, Bloomberg SPACE (London), The Power Plant (Toronto), Seoul Museum of Art, Artspace (Sydney), The British Museum (London), the Contemporary Art Gallery (Vancouver), Plug In ICA (Winnipeg), Art Gallery of Ontario (Toronto), and the Liverpool, Sydney, and Montréal biennials. Koh was a recipient of the 2010 VIVA Award, and a finalist for the 2004 Sobey Art Award. Formerly an Assistant Curator of Contemporary Art at the National Gallery of Canada, she is also an independent curator and partner in the independent record label Weewerk. Koh is represented by Catriona Jeffries Gallery, Vancouver.
www.germainekoh.com

Originally from Dieppe, New Brunswick, Mireille Bourgeois has an MA from the Centre for Curatorial Studies at Bard College. An active member of the arts community, she has independently curated and contributed to programs throughout Canada, the US, and Germany, and has published artist books and monographs, as well as critical writing for Visual Arts News, Creative Times Press, C-Magazine, the Canadian Film Institute, and the online art blog Artengine. Bourgeois is the former Director at the Centre for Art Tapes in Halifax, Nova Scotia, and is currently an independent curator.

Chantal Molleur is co-founder and curator of White Frame, a nonprofit association that operates at the intersection of video art, cinema and photography. She has upcoming curatorial exhibition projects in 2014–15 with Swiss artists Philipp Gasser and Max Philipp Schmid, and development collaborations with photographer Katrin Freisager and experimental filmmaker and photographer Ralph Kühne. She is the Swiss delegate for the International Festival of Films on Art of Montreal where she will be presenting a special focus on Switzerland in 2014. She is lecturer and promoter at the video department of the Lucerne University of Applied Sciences and Arts where she headed in 2012–13 the first pilot project on Transmedia storytelling.
www.whiteframe.ch

The Centre for Art Tapes is pleased to announce a presentation of Aboriginal media art at the Mi’kmaw Native Friendship Centre on Monday, March 30, 2015.

CFAT is excited to announce the launch of Poems for Impending Doom an online exhibition curated by our current Curators-in-Residence Lucy Pauker and Alessia Oliva.

The Centre for Art Tapes is pleased to present the 31st Annual Media Art Scholarship Presentation. The scholarship is a mentorship program that provides local artists with the chance to explore an aspect of media art with which they have little to no experience.

Possible Worlds, curated by David Clark, is a showcase of work by artists who are asking questions about the political and personal potential of Virtual Reality as a unique and distinct medium.

We’ve invited over our neighbours at A Tiny Lab for Early Learning to collaborate with us on a very exciting exhibition!