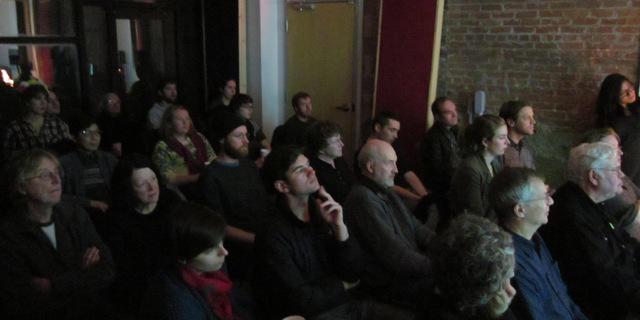 The Centre for Art Tapes’ Local Artists-in-Residence teaming up for a final talk:

Now in its 35th year, the Centre for Art Tapes (CFAT) continues to present programming meant to engage local audiences in a critical way about Media Art in the Atlantic Provinces and beyond.  On April 24th at 7pm CFAT is hosting an artist talk by the 2013/14 Local Artists-In-Residence, Khanhthuan Tran and William Robinson, to end their Residencies.

The Local Artist-In-Residence Program provides an opportunity to local media artists for development and experimentation of new work involving audio, video, or new media. The artists chosen receive in-kind support in the form of free access to facilities and equipment, access to technical assistance during the residency, and stipends.

Khanhthuan Tran’s Residency Project has been using layers of appropriated footage to compose scenes of people watching late twentieth-century disaster film footage. Tran: “The disaster film genre is thematically transformative: from destruction arises reconstruction…[In this project,] form follows function: disaster cinema is used as a metaphor for the transformation of film, from analogue to digital and the transformative process of modification within collage film.”

William Robinson’s project deals with tinnitus. Robinson has sought to “decipher the indivisible connection between silence and sound in connection with our cultural, collective and individual designations and experiences of silence”. Robinson also recognizes the importance of Artist-Run culture to assist artists, saying, “CFAT’s programming, staff and mandate allow and encourage artists like myself to produce, explore and experiment with new media based aesthetic and conceptual ideas (projects) that attempt to challenge and enrich both the public and the artist themselves”.

Life of a Craphead Artist Presentation

In celebration of CFAT’s 40th anniversary, we’re pleased to announce Life of a Craphead as our next artist in residence.